by Watipaso Mzungu
in Development, Feature
2 min read
0
Share on FacebookShare on TwitterShare on WhatsAppShare on LinkedinLinkedinShare via Email

Environmental degradation and depletion of natural forests are some of the major challenges people face in their efforts to contribute to the development of their communities, according to Hilda Minika, chairperson for Somba II village development committee (VDC) in Blantyre.

Minika said recently during a media clinic at the Blantyre urban office of National Initiative for Civic Education (Nice) Trust organised for communities to voice out their concerns on the state of local governance and development in their areas.

She said villagers are failing to mould bricks for the construction of various development projects because there are no trees.

Minika warned that the situation could worsen if government does not reduce the price of cement, which communities can use to make blocks.

Explained the VDC chair: “I fear that development will come to a standstill one day because communities are failing to contribute bricks to the implementation of requested projects. Government must do something about it. Prices of cement should come down now or we could be destined for endemic poverty.”

However, Minika stated that her committee has already started mobilising communities to plant trees in Soche Hill and their backyards to avert the [tree] crisis.

He said there has been increasing demand for fuel wood and construction material and logging leading to reduction of biodiversity, incidences of soil erosion and land degradation in the country.

Mlanga feared that the increasing natural resource scarcity could put lives of women and children, who spend hours of work and cover long distances, at risk as they go about collecting fuelwood.

“Natural resource degradation decreases the welfare of rural households in many ways. Communities must, therefore, commit themselves to the planting of trees every rainy season to avert the looming crisis,” said the chief.

He said environmental and natural resources depletion have a big economic impact, saying countries spend millions to restore green cover, cleaning up of landfills and protection of endangered species.

“Nice Trust will, therefore, undertake to provide civic education on effects of climate change alongside empowering them to understand their roles and responsibilities in the development of this country.

“We are working very hard to ensure communities are empowered with correct information, lobbying and advocacy skills to assist them as they demand development projects from their duty-bearers,” hinted Monjeza.

But Monjeza urged all Malawians to assume their roles and responsibilities in ensuring that people’s right to development is attained.

He also urged community leaders to mobilise people to actively participate in the formulation and implementation of development plans in their areas. 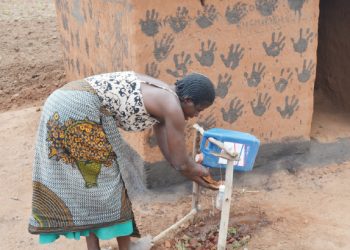