They are hundreds kilometres away from home to settle as tenants in tobacco farms in Rumphi. The distance, however, has not been a factor to stop them from practicing and preserving their cultural heritage.

The tenants of Chewa origins have been true to their traditions for over three decades by practicing Gule Wamkulu, a secret cult and ritual dance, in the pre-dominant Tumbuka cultural district.

It was in 1970, that the first masked dancer set foot on the grounds of Rumphi. Njilamanda Mwale, 82, was the man behind the masked dance. It started as an entertainment dance. But the desire for belonging was strong to find solace in the masquerade as a medium between ancestral world of spirits and the mundane present—a spectrum of life’s emotions and actions.

Mwale went on to establish kudambwe to initiate his seven male children—all born in the district—into the secret society.

Since then, Gule Wamkulu in the area under principal village head Chimkhwawo, Traditional Authority (T/A) Chikulamayembe has grown as an important element of culture among the Chewa in the district.

“Most of us are tenants in tobacco farms but have made Rumphi our home,” said Mwale, who has been honoured with the village head title, Lusaghala.

Mwale, originally from Tchale Village, T/A Nsakambewa in Dowa, first settled at Lisandwa Malawi Young Pioneer (MYP) Base in Kasungu. He moved to Rumphi in 1970 to teach farming at Thulwe Scheme. After the scheme disbanded during Operation Bwezani in 1993, Mwale together with a few friends remained in the district to seek jobs in tobacco farms.

“We asked for land around here and built a village. The village has grown so much such that we decided to start practicing our cultural heritage,” he said.

Mwale never harbours thoughts of returning to Dowa. He has eight children and 52 grandchildren.

“All male adult children are initiated into Nyau,” he said.

Interestingly, however, all his grandchildren are Tumbuka by language.

“Apart from dance, we also hold initiation ceremonies such as kudambwe and kumeta. During such ceremonies, we initiate the youth into adulthood.

“We also conduct ceremonies such as chikumbutso which takes place on Christmas to remind ourselves of our origins. This is the time we unveil the initiated youths. Such events are spiced up by gule wamkulu dance,” said Mwale.

He said they also have their own graveyard to bury their relatives. He said in the past they used to dispatch bodies to their districts of origins such as Dowa, Mchinji, Kasungu and Lilongwe.

“In those days, we used to dispatch bodies home. But now we have our own graveyard because this is our home.

“We are lucky that chiefs here have accepted us to practice our culture and we mutually co-exist. Sometimes, we are invited to perform during Tumbuka cultural events,” said Mwale. n 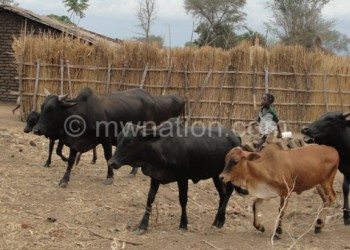 Is lobola out of touch?