When maize farming failed to feed his family, Anderson Josteni tried something else. Horticulture came to his mind although his family and friends thought he was crazy. Little did they know that Josteni had seen what vegetable farming can do in Mulanje District.

Last year, Bvumbwe Agricultural Research station and the Department of Geography at Chancellor College took Josteni and others from Group Village Head Ntwana Traditional Authority Mulilima in Chikhwawa District to Mulanje where farmers are flourishing with vegetable farming. In fact, this was part of the climate change project the two institutions are running jointly on a pilot phase.

“When the team from Bvumbwe trained us to change our mindset towards maize, I was reluctant at first. My thinking was that growing maize was the only crop that would solve my financial problems. However, when I learnt how one farmer in Mulanje had his life changed economically, I gave it a thought,” says Josteni.

As a trial, Josteni invested K11 000 (about $44) in vegetable farming and the remaining part of the garden was used for maize as a security measure. He grew chinese cape and mustard greens (mpiru). The maize failed him yet again. This is where Josteni lives to tell a life changing story becasue of the vegetable farming.

“As part of the project, we were trained in various techniques to produce quality vegetables like the use of compost manure. Since Chikhwawa is very hot, we were euiped with skills of storing dew.

“I couldnâ€™t believe what I made from vegetable sales. I didnâ€™t have to go far. I was selling at Dyeratu Market. On average, I made K5200 (about $20.80) a day and after the total sales, I had close to a hundred thousand. The beauty about vegetables is you can grow twice a year and I gave it another chance.

Today, I have built a house and can feed and educate my children with ease,” he says.

Josteni has taken vegetable farming and dedicated all his land to horticulture. At the moment, he ably grows onions and cabbage, something that was once thought to be impossible to grow in Chikhwawa because of the hot weather and annual floods. All this positive story courtesy of compost manure and moisture storage.

Other than transforming peopleâ€™s lives, the introduction of horticulture is part of climate change adaptation projects being run by Chancellor College and Bvumbwe Agricultural Research Station.

Research done by scientists from the two institutions shows that there is a link between people leaving in urban areas and those in rural areas. One of the links is source of food and primarily vegetables. Because of climate change resulting in erratic rains and change in the growing season, vegetables have not been easily available for middle class citizens.

Based on the results, project coordinator, Merriam Joshua thinks it was imperative to improve the source of vegetables, hence the introduction of the project in Mulanje and Chikhwawa. Chances are high that it will spread across the country.

“We noted that climate change effects focused much on rural areas leaving out those in urban areas. There are so many ways in which people in urban areas are vulnerable, but we chose to concentrate on the food linkage-which is also a priority in the National Adaptation Programme of Action (Napa).

“We are running the project with University of Dar es Salaam in Tanzania and Greenwich in the United Kingdom. The results look promising and we shall make it national for more people to benefit since maize has let us down due to erratic rains,” said Joshua.

In the long run, the project hopes to attain food security for people in urban as well as rural areas.

For T/A Mulilima, results of the project have helped transform lives of people financially.

“When it is too hot, we are in problems and when there is too much rain, we are in problems too. The project offers a solution to challenges as it allows irrigation and use of new techniques to allow vegetables grow minus the hot weather,” said Mulilima. 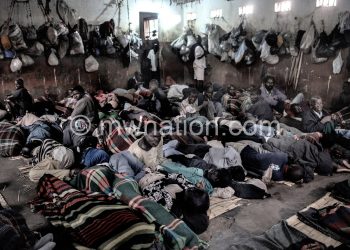