by Holyce Kholowa
in Feature, Front Page
5 min read
0
Share on FacebookShare on TwitterShare on WhatsAppShare on LinkedinLinkedinShare via Email

Rice and fish farming share a common denominator in that they both need water and land to thrive.

If the system is well managed, apart from offering farmers huge benefits or rewards, it can turn round the country’s economic misfortunes.

However, climate change has negatively affected fish and rice production in the country due to erratic rains.

Joseph Mwateketa from Tiyanjane Farmers Club in Salima said the pilot integrated fish-rice system, a climate-smart technology introduced in the area by World Fish Malawi, has the potential for enhancing productivity, increasing incomes, diversifying diets and improving nutrition of rural communities in Malawi.

He said the average size of rice plots is less than 0.5 hectares  per household and 85 percent of  land under cultivation is rain-fed, yielding between 1.0 and 1.5 tonnes per hectare while the remaining 15 percent irrigated land yields between 3.5 and four tonnes per hectare.

“Such levels of productivity are inadequate for rice production to be considered a viable solution to increase incomes, food and nutrition security of rural people at risk of climate change in Malawi,” Mwateketa said.

He said the benefits of rice-fish system go beyond producing additional fish in the rice paddy as it is believed that they control weeds and pests.

“And there is a fertilising effect from the fish excreta which increases nutrient availability to the rice crop,” the farmer said.

Another farmer, Grant Gusto says rice-fish culture technology preserves an ecological balance in the rice paddy and may not only be high yielding, but also a sustainable farming system.

He said the pond is divided into two-parts with one part stocking fish and the other used as a rice paddy.

“The fish live in the pond but rest and lay eggs t in the paddy,” said Gusto.

He expressed optimism that the research results will enable farmers to get more profits, especially when the lake closes for fishing.

“The farmers, who are also fishers, will be able to sell fresh fish. Despite the global climate change effects, we are optimistic of increasing our returns through this fish-rice integrated farming technology,” said Mwateketa.

World Fish Malawi research assistant Meriam Msatilomo Phiri said  her organisation established a research at Lifuwu Research Station in Salima to explore on the results of rice and fish farming on the same piece.

“Due to high population growth, integrated rice-fish farming systems seems to be such an option, producing more rice and fish with less use of land and water in a sustainable way,” she said.

The project seeks to address challenges in the smallholder agri-food system in Malawi by developing climate-smart, integrated technological options adapted to local conditions and the farmers’ realities with support from the European Union (EU).

Phiri said the project comprises a thorough understanding of socio-economic conditions that drive or hamper adoption through a multi-institutional and multi-disciplinary research effort with the goal of improving productivity, profitability and sustainability of agriculture and food systems in Malawi.

She said: “This action will develop climate-smart integrated technological innovations that can contribute to enhanced resilience of agricultural and food systems under climate change in Malawi. For example, on the same land, farmers will be able to harvest fish and rice that will maximise their profits.”

Phiri further said innovations will be developed and tested to increase productivity and resilience of agri-food systems while risks related to the systems will be reduced through adoption of the appropriate management options.

“Impacts of technological innovations are evaluated through a participatory process that enables the identification of potential impact pathways and of synergies and trade-offs between sustainability outcomes both at farmers and food systems levels,” said Phiri.

Lifuwu Research Station manager Cornwell Imani said the first year outcomes of the research are enviable as they have produced quality rice and fish.

He indicated that the technology has high probability of environmental conservation as they used the rice brans to produce briquettes for drying fish.

On his part, Ministry of Agriculture director of agricultural research services Wilkson Makumba said if technologies are used properly, they can benefit more farmers and the country as they will be growing rice as well as raising fish more than once on the same land in a year.

The director noted that Malawi previously relied on fish from Lake Malawi, but due to lack of other fish production alternatives, the fish reduced to meet the growing demand.

“This technology will complement the Lake Malawi fish production whereas the rice has enviable prices on the market that has potential to improve the economic status of farmers and the nation,” he said.

From Covid-19 to Russia–Ukraine crises 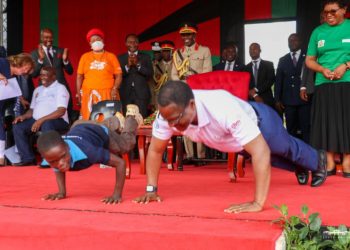