by Grace Phiri
in Business News, Front Page
2 min read
0
Share on FacebookShare on TwitterShare on WhatsAppShare on LinkedinLinkedinShare via Email

The outlook is contained in the recently published November 2018 Country Report No. 18/336 on Malawi’s first review under the three-year Extended Credit Facility (ECF) arrangement and requests for modification and waivers of non-observance of performance criteria. 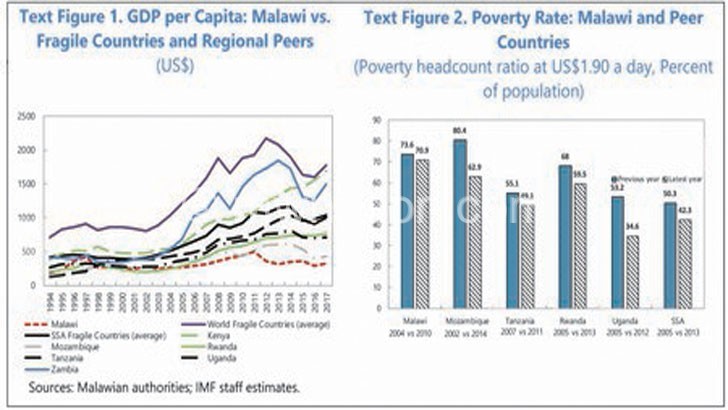 The report, among others, highlights positive outlook on inflation, growth rate and recommends that automatic fuel pricing should be forcefully implemented.

Reads the report in part: “Growth is expected to rebound next year and strengthen over the medium term, assuming improved infrastructure, better cropping techniques, and increased donor assistance. Single-digit inflation is anticipated to continue in line with prudent policies and declines in food and international fuel prices. The current account deficit is expected to narrow supported by strengthened competitiveness development that is also expected to have an impact on electricity tariffs because currently and fiscal restraint.

“However, political pressures ahead of elections could weaken reform implementation, governance challenges could further postpone donor support, and adverse weather could harm agriculture.”

IMF, however, observes that economic growth, which averaged 3.7 percent during 2012/17 financial year, is barely above population growth of 2.9 percent in 2017 which as a result, has seen Malawi’s per capita GDP ($322 in 2017) falling further behind that of its regional peers and other fragile States .

This could be a setback to Treasury’s projections to double Malawi’s per capita average income earned per person in a given area- in the next five years with the scaling up of the investment, according to the final draft of the Malawi Growth and Development Strategy (MGDS) III.

According to the strategy, fiscal overruns are premised on the fact that the macroeconomic framework recommends an up-scaling of investment by an additional $1.2 billion (about K876 billion) during the implementation period.

This capital injection will result in a GDP growth rate of about 6.9 percent during the first year and an average of 6.2 percent in the subsequent years.

This is expected to create an estimated 11 percent increase in employment and tax revenue, according to the report.

Malawi was granted a $112.3 million (about K82.5 billion) three-year programme under the ECF arrangement to entrench macroeconomic stability and to foster higher, more inclusive and resilient growth.