At 16, Lizinet Chatambalala believes she has what it takes to realise her dream to become a nurse.

She says there is a supportive environment both at home and her Makunje Primary School, located about 50 kilometres west of Lilongwe City, to enable her and fellow learners excel in education and become productive citizens in future.

The confident Standard Seven learner says “My parents have been encouraging me to work hard in class and break the family poverty cycle.

“I will not disappoint them. I also get support from teachers and mother group members who regularly advise us to remain focused on education rather than rushing into marriage.”

To ensure learners are supported on their needs, Lizinet says the school involves them in the expenditure planning of school-related funds such as the school improvement grant (SIG)

A member of the learners’ council, Lizinet says the meaningful interface between leaners council and school authorities offered them a platform in 2019 to demand that the school buys sanitary pads for girls aged over 11 to fight cases of school absenteeism during their menstruation periods.

He says the sanitary pads have reduced girls’ absenteeism, from about 10 per class in a month four years ago to only one or two now.

Explains Thom: “Most girls would miss classes for up to one week a month due to menstruation. This cost them academically and that explains why, as a school, we did not hesitate to act on their demand for sanitary pads.

“The school has also constructed a girls’ washroom to enable menstruating girls clean themselves up and continue attending lessons.”

He says the support girls have been getting at the school has improved their performance in Primary School Leaving Certificate of Education Examinations.

Thom largely attributes the change in fortunes for girls at the school to a tax justice project implemented by ActionAid Malawi in partnership with community, district, and national structures.

The project has direct implementation in the selected schools of Chitipa, Ntchisi, Lilongwe Rural, and Neno.

ActionAid Malawi estimated few years ago that 154 000 girls of school-going age in Malawi are out of school due to several factors, including inadequate education financing, especially in primary education.

ActionAid Malawi project officer Aisha Katungwe says in response to the depressing girl education situation in Malawi, the project focused its campaign on calling upon the Malawi government to increase the size and share of the national budget towards education while ensuring there is a robust scrutiny of the budget to address sensitive issues affecting vulnerable learners, including girls.

She says the four-year project has carried out several studies to generate evidence to engage duty bearers such as parliamentarians on issues affecting girls and vulnerable groups in the education sector.

Says Katungwe: “We have been conducting capacity building to empower communities to track budgets at local levels.

“We have also been organising parliamentary visits to the target schools to enable parliamentarians have first-hand appreciation of challenges in the primary school education sector and take appropriate action.”

He says studies generated by the project provided a learning tool on how government could generate more revenue to deliver gender-responsive public services in the education sector.

Says Ligomeka: “We thank ActionAid for highlighting the deficiencies in our tax laws.

“The organisation’s findings helped government develop a five-year domestic revenue mobilisation strategy which involves reviewing some of the harmful and archaic tax laws such as the double taxation agreements with several countries. Moreover, the new mining regime has set standards which will help address the issues of harmful tax incentives being mining companies.”

As Ligomeka touts government’s move to generate more resources to increase the size of the national budget, Lizinet hopes more of such resources will go towards primary schools like Makunje to keep more girls in school.

She says: “If government can allocate resources to primary schools for construction of additional infrastructure, purchasing of more desks and sanitary pads for girls, more girls would realise they dream.

What’s in the land laws amendments 

Criticism forces My Soul Acapella out 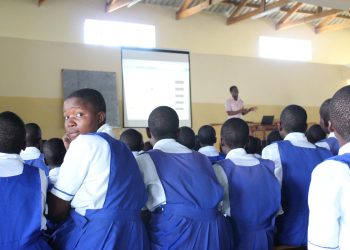 Criticism forces My Soul Acapella out