Money supply could push inflation up

by Orama Chiphwanya
in Business News, Editors Pick
3 min read
0
Share on FacebookShare on TwitterShare on WhatsAppShare on LinkedinLinkedinShare via Email

Growing money supply in the economy has come under spotlight with local market analysts saying if left unchecked, it could push up inflation.

University of Malawi’s Chancellor College (Chanco) economists argue that growth of money supply— a certain measure of the amount of money in supply in an economy—drives up inflation, saying there is need for close coordination between monetary policy and money supply in the economy.

Reserve Bank of Malawi (RBM) latest figures show that broad money supply (M2) grew at an annual rate of 20.2 percent in May 2018 from 17.7 percent the previous month. 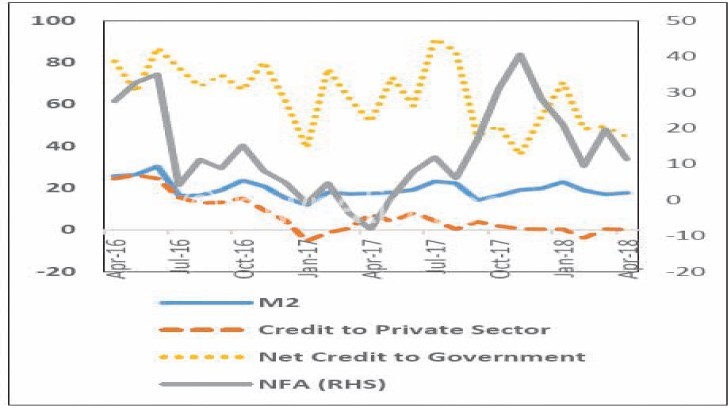 During the same period last year, figures show that the annual growth rate of broad money (M2) stood at 18 percent.

RBM says the growth in M2 was underpinned by both narrow money—money in forms that can be used as medium of exchange such as notes, coins and bank balances—and quasi money, highly liquid assets which can easily be converted into cash, which rose by K46 billion and K16.5 billion to K535.9 billion and K575 billion, respectively.

A senior lecturer in the department of economics at Chanco Exley Silumbu said in an interview on Tuesday money supply should not be an issue in an economy as long as it expands in line with nominal gross domestic product.

He said the current situation if not carefully managed may put pressure on government, particularly on its efforts to tame inflation.

“There is a possible surge in prices if the situation is left unchecked. This is a risky situation as it can undermine efforts that have been put in place to contain inflationary pressures,” he said.

Another Chanco macroeconomist Lucius Cassim said when money supply is increasing in an economy, it puts upward pressure on prices.

“Indeed money supply is increasing than the rate it was last year though this has not translated into increased in inflation for now.

“We have, however, seen the RBM putting in place measures that are countering the upward pressure. We are only hoping to see the central bank continuing with the stance it has taken to ensure that this increase does not gnaw in the gains registered in the economy,” he said.