Stella came first among all learners in her district in the Malawi School Certificate of Education (MSCE) examinations.

Thanks to the feat, she enrolled for a male-dominated pure science programme at one of the public universities. Everybody celebrated her achievement.

But a few weeks into the programme, Stella was failing to cope. There was just too much material to study and worry about.

From looking for accommodation off campus to sprinting for seats during lectures, the toil was just too much for a 17-year-old girl.

In late afternoons, Stella would leave the college campus early to get to her off-campus ‘hostel’ before sunset.

She couldn’t risk it having heard enough about attacks on students and theft of their electronic gadgets. Oftentimes, she missed library sessions and group discussions.

Unsurprisingly, Stella received a warning from her faculty that she risked being withdrawn from college if her performance did not improve.

Stories like Stella’s are numerous in Malawi’s public universities. Many young girls dwelling off campus struggle to balance college work and the stressful long walks.

Increased enrollment means that on-campus accommodation is not available for everyone. Many have to do with overpriced but often scruffy houses-cum-hostels in some kilometres off campus.

This exerts a financial burden on guardians.

School closures to stop the Covid-19 pandemic has resulted in a clash of university intakes. Classroom hours have been extended from early morning to late evening to accommodate the enrolment boom, with learners scrambling for few seats and missing some lectures.

“Coming here is hard enough, but factors such as housing and lack of classroom space affect girls greatly,” she explains.

Mlauzi says that some girls end up repeating courses or being withdrawn on academic grounds due to accommodation issues, safety and classroom space challenges that affect their learning.

“Science programmes have lab hours in the afternoon when a student has to go off campus and cook. The time it takes for her to go to her off-campus residence and come back on campus to the lab is exhausting,” she says.

However, there is hope for the future, particularly for female students in male-dominated programmes.

In 2021, the Government of Malawi, with funding from the World Bank, launched the $100 million Skills for a Vibrant Economy (Save) project in nine higher education institutions, nine technical colleges and 30 skills development institutions

The project seeks to reduce barriers to female students’ access to tertiary education and provide a safe and enabling learning environment.

It includes construction and enhancement of classrooms, girls’ hostels and laboratories to expand physical and virtual space for student enrolment.

Other activities include the improvement of the capacity of instructors and faculty members and provision of financial, mentoring, and academic support for students.

Save promotes women empowerment as well as increased access and participation in tertiary education.

Under the project, Unima will construct a two-storied teaching facility in Zomba to expand the learning space for students like Stella.

Every hour, about 1 900 students can attend classes in this teaching complex.

This has resulted in increased participation of female learners in programmes previously dominated by male students, including science, technology and mathematics (Stem).

This is in line with the project goal of increasing access, particularly for females, to relevant skills targeting priority areas of the economy.

“We have also put in place a lot of student support mechanisms to make sure that no student fails,” says Madise.

The project has also increased financial support extended by the Higher Education Students’ Loans and Grants Board to needy students in through a needs-based grant scheme for female students. This includes open, distance and e-learning students) for disciplines in priority areas of the economy.

The National Education Sector Investment Plan for 2020-2030 states that most students cannot be fully assisted to cover the costs of their studies partly due to some inefficiency in the higher education loan scheme.

The board provides loans to approximately 30 percent of students in public and private colleges, the amounts cover less than half of the funds required by applicants for tuition, upkeep and stationery.

The Save project will provide targeted and sustainable financial support to needy students to cover tuition, upkeep, books, stationery and e-learning gadgets.

There is hope that Stella, like many girls in Stem programmes, will be among the over 45 000 university students and 65 000 trainees in technical and vocational colleges who will benefit. From uncertainty to university 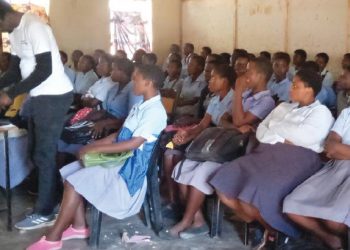 Threats to saving girls from marriages