Tokha should raise standards above predecessors

You might be among the few persons in Nyasaland who still maintain a modicum of sanity and that is the reason I sometimes take the liberty to write you an ordinary letter.

How else would I keep myself sane in all this madness surrounding us? I get closure when I empty out my thoughts in matters that might not even be addressed in your court and I hope you will understand me.

My lord, the political terrain is too slippery, so they say, for the so-called drivers of change to demonstrate that they are meaningfully maneuvering forward.

And when such things happen, even Kabanza motorcyclists and oxcart drivers think they have what it takes to pull a truck of progress out of the mud of stagnation.

My lord, I do not blame the likes of Mapuya, one of the worst drivers to have been entrusted to take this Nyasaland to some Singapore of prosperity, for finally finding a voice against Tokha Alliance’s huffing and puffing as if he left some legacy himself worth celebrating about.

The Tokha Alliance (or Tadeyo’s Tokha Are Liars if you like) should blame themselves for resuscitating cadavers such as Mapuya’s People’s Demagogic Party (PDP).

My lord, you get the impression that the Tokha Alliance did not understand how this country was greatly run down by past regimes and why their ascendancy to power brought some hope that the nation will be fixed for once and all.

I would submit that the majority of the electorate thinks the alliance is displaying similar attributes of arrogance that PDP demonstrated when it promoted partisan and selfish interests, something that eventually brought it down.

My lord, we have talked a lot about how great expectations make frustrated men in the case of Tokha Alliance, but I never expected that the standards the alliance set to transform Nyasaland would be so low so as to be measured against Mapuya’s achievements and failures.

Measuring oneself against PDP or espousing their mode of operations surely is not a sign that the country is getting anywhere and when the alliance members are told about it, they unfortunately develop Goosebumps.

The electorate had high expectations for the ruling clique while Tokha itself could not see beyond merely replacing Mapuya as it had no tangible plans how it would go about transforming the nation.

Listening to criticism and embracing contrary opinion would not translate into a sign of weak leadership for the Tokha Alliance. But that’s what some people driving policy within Tokha think when they attack those who question decisions in the same PDP manner.

My lord, it is not ambitious to be borrowing ‘one president at a time’, it is our time’, and muchira, refrains from the archives of failure. You can do better than that.

Save for the likes of Sauli, Bigleg Phiri, Nyatembo and a few hard working ministers, most of the leaders and supporters want to remain praise singers for good.

As expected, my lord, they will not be bothered about this letter because they believe it is also motivated by envy.

If only they could set their standards high at least we could believe their talk,

Pastor wants me to have his baby, should I oblige? 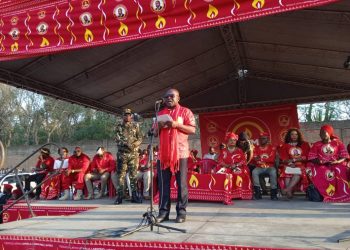