Rose Mulenga, 21, from Matuwamba Village, Traditional Authority (T/A) Mkanda in Mchinji, did not have the opportunity to know her mother. She died while giving birth to her.

Forced into orphanhood as a baby, Home of Hope, a children’s household in Mchinji, became her home ever since and Mulenga found all the care that a child would need from day one.

While it is common for some orphaned babies to be ignored or forgotten; the case was different for her and 424 other children who have entered through the doors of Home of Hope as babies since 1998 when it was established.

Others such as Audrey Elias, 21, and Jacqueline Mbughi, 23, who have been raised at Home of Hope, attest that the love and care they have been given at the orphanage has impacted positively on their lives.

“I came to Home of Hope when I was barely a month old; and the love and care that I got here has been incomparable.

“We have received so much care and now we have completed our studies and can stand on our own,” explains Elias, who now holds an advanced diploma in community development from Namitete Community College.

Home of Hope, which is now home to 892 orphans and vulnerable children, including seven with albinism, was founded by retired Pastor Thomson Chipeta following a vision he had that God was calling him to build an orphanage.

“God gave me a strong vision while I worked as a retired pastor in a congregation that I should build an orphanage for needy orphans and vulnerable children. You can understand that I was motivated to do this because I too was brought up as an orphan,” Chipeta explained.

Mulenga, Elias and Mbughi and many others have been cared for by Delia Duwe, whom they fondly call aNaDube, one of the many house mothers at the home.

She is the caregiver who helped to raise and nurture them—seeing to it that they were fed and bathed; that their clothes were washed; and she cleaned them up just like a mother would.

Everything the children lack is provided for at Home of Hope, from school necessities to personal needs, when resources are available.

This resonates with what Home of Hope aspires to achieve—caring for the children and providing all their needs to help them achieve their full potential. In this line, a lot of them have graduated from college and are employed.

Additionally, in line with the reintegration programme, which is a framework for reintegrating children with their families or other forms of alternative family based care, once in a while the children visit their families so that they remain connected to them.

All infants at the home are provided with milk until they can start to eat other foods, and all the other orphans and vulnerable children are provided with other forms of food, clothes and shoes donated by well-wishers within Malawi and beyond; coupled with free education all the way to tertiary level.

Home of Hope operates in sections, providing education for orphans from nursery school to vocational education in courses such as bricklaying, carpentry and joinery and tailoring and designing.

However, orpharned children are not the only ones that benefit from Home of Hope; many others from surrounding communities benefit too.

While some come to work for food, others are employed as care givers, teachers, nurses and gardeners. These people are empowered to provide for their families.

Joyce Kadzuwa is a widowed mother of four who has been caring for children at Home of Hope since 2005.

“It is my passion to help take care of the children at Home of Hope. I get satisfaction from seeing them grow up and become independent citizens,” says Kadzuwa who lost her husband in 1994.

Additionally, she and others, as well as those from surrounding communities also access the Home of Hope Clinic, getting all the basic medication dispensed there. The clinic serves more than 15 villages surrounding Kaluza Village in Traditional Authority Njoka in this border district. 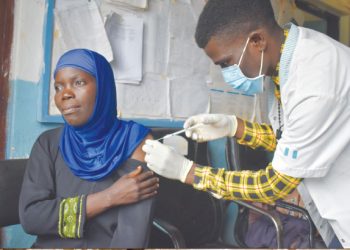